Breaking News...Maxine and Russ had a Baby!

You heard it here first, after years of dodging the "when are you starting a family" question we finally delivered - literally! Maxine Walker McLeod Miller was born on August 31 at 3:15 in the afternoon. To say we are walking on sunshine would be an understatement. Actually walking in our sleep would be a bit more accurate a phrase these days! What with late night feedings, diaper changes, and all of the other fun things that seem to happen with a newborn in the house, we are delighted to have the opportunity to sleep at all - who cares if we are doing it while walking! We feel certain that 2009 will always stand out as both a great year and a year of great transition.

What a fabulous 2009! We have had a great time with friends and family to date, Maxine's had her big four…, um 29th birthday, the marriage of a cousin, a couple of long overdue visits from some lifelong friends (you know who you are), a couple of weekends in NYC with friends, a delayed high school graduation trip for Russ and friends in Amsterdam, and the birth of our daughter. We have been truly blessed this year. Honestly, what more could we possibly ask for?

If you are curious as to how we adjusted to pregnancy and how we are adjusting to parenthood, check our baby blog! If you are prepared to fall in love via photos, please check out our newest photo gallery of baby photos!

We have been hard at work taking photos for your viewing pleasure, here are the highlights of our recent additions:

Thanks for visiting and we hope you enjoy!

If you are on our site, chances are you know who we are but just in case... there is the story of Maxine and Russ just to whet your appetite. Then for your viewing pleasure we have photos from our engagement and finally, if you are still with us, we have photos and video from our wedding weekend in 2002.

We have loads of photos from gatherings with friends and family. Most notably we have:

Ever the adventure lover, Russ signed up for the Skip Barber Racing School at VIR and what a good time he had! The little go-carts were a lot different than riding in the Viper but judging by the photos it looks like he had a blast.


Russ got Maxine on the track for the Mazda Drivers School held at VIR on Father's Day weekend. We packed up the RX-7 and the Viper and had quite a weekend in Alton, VA.

Russ has found a new addiction and we have Viper Days photos to show for it! Who would have thought mild mannered Russ Miller would turn into a hot rod owner!


You cannot live in the DC Metro area without experiencing at least one Presidential Inauguration. It was a cold, cold day but we managed to take a few photos at the Capitol and the South Carolina Society's Inaugural Ball.

Together or apart, we tend to pick some pretty neat places to travel. As you can see from Maxine and Liesl's trip to Greece, Maxine prefers the finer things in life, such as indoor plumbing. Russ' idea of a successful vacation, however, is one in which he gets out alive but only after as much excitement as he can muster. A perfect example being his solo journey to Alaska in 2000.

We also have some great shots from our exciting vacation in the Enchantments where we had a lovely four-day hike in the Cascade Mountains before we were rescued from forest fires! Oh, and we cannot forget the awesome shots from Russ and Cynthia's African Safari!

Russ and Steve went on an awesome hike and canoe trip across Admiralty Island, Alaska where they saw bears, ate a salmon they caught with their own hands, saw orca whales not far away from the canoe, and got lost on the last night before arriving safely in Angoon, AK!

Russ and Wayne took off for a hike across the Canadian Rockies as their Summer 2004 adventure. From what I understand the hike was grueling but the photos look like it may have been worth the work.

In late September 2006 we dusted off the trusty Ally and took her on a Shenandoah River Canoe Trip. Ever the adventure hunter, Steve joined us and even talked his girlfriend and her daughter into coming along. It made for a nice little weekend getaway.

November 2006 marked Russ's fortieth birthday! In true Maxine and Russ fashion, we set off on a Southern Caribbean cruise to celebrate the big day. It was pretty cool. We sailed out of Norfolk, VA and highly recommend it to having to fly down to Florida. 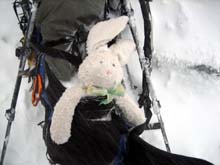 As part of the Russ and Hans mid-life crisis, they decided to climb to the top of Mount Rainier in June 2007. Hans put in a stellar performance and summited on his first attempt. We have twenty four pages of photos from their Mount Rainier Climb!

Cindi and Maxine (now definitively proven to be the real brains of both operations) decided to pass on the hike and did the spa thing instead. The mountain had other ideas for Russ so he and Carrot made a second attempt in September 2007, see Mount Rainier Take 2 for the photos. Alas a blizzard with 40-50 mile per hour sustained winds got in the way of his plans so there just might be yet another re-match for Russ and the mountain. 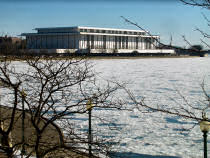 Tired of being stuck inside from the cold, Maxine and Russ perfected the art of making a snowman! And for all of Maxine's friends back home that are not used to the snow we are offering step by step instructions on how to build a snowman.

We do not have any cute photos to go with the food but after several requests here are the recipes for Aunt Nancy's Cranberry-Apple Casserole, Sylvia's Mom's Chili and my chocolate sauce.